At age eight, I found a matchbook with “Draw Me” written on the cover beneath a line drawing of a woman's head in profile. It promised a prize. I copied the drawing and asked my mother to send it in for me. She did. I didn’t win.

It was not my intention to become an artist. Much of the journey has been a lot like that first attempt. As a kid, it was stories that captured me. My father would read bedtime stories to me and my brother Chewie. They were fierce, powerful Greek and Norse myths. I fell in love with stories. My friends were the artists. I was not. I wanted to tell stories. I was impressed, though, with how capable my friends were, how they could draw––"Draw Me"––and I wanted to be a part of their world. I joined art classes with them. I liked being there. I liked doing it. I didn't care that I wasn't good at it. I persisted and, because I am a plodder, over time I became skilled. In my plodding way, I made things every day until I realized I had become an artist.

But the power of the ferocious myths my father read to us each night never left. I embraced the fantasy and brutality of those bedtime stories. We met Medusa, Daedalus, and his son Icarus. I believed these stories absolutely until, as an adult, I discovered the word "medusa," in Sanskrit (one of the oldest written languages), means “sovereign female wisdom.” And just like that, she was no longer the villainous, snake-haired monster created by men. She was a queen, an empress sage.

At the time, I didn't know this was the beginning of what would become my life's work. The bigger realization was that art could tell my stories. I could draw, paint, or sculpt stories. Art became my book. It holds my stories, my reimagined mythology, not the one given to me by men. Every day art gives me the tools––imagination, the ridiculousity[1] of humans, their bones, creatures, color, our history on this planet, the planet itself––to build the goofy or the sublime, to express the love or rage I feel. I can build civilizations. I can tear them apart. I can challenge the propaganda of myth and reconstruct history.

Clay became my primary canvas. Sculpting clay is drawing in the round for me. I can add, subtract, paint, paint over, resurrect or destroy. Clay is the earth. It is dirt. It is alive and seductive. It has, as do we humans, both strength and fragility. I create mythologies out of the dirt of the ordinary. Like South Carolina’s dust and the summer storms of childhood at our grandparents, the smell and feel of the dirt becoming clay had the power of the ordinary becoming extraordinary. Chewie and I made up our own stories. "Westward Expansion," with Monty the dog pulling the beat up Radio Flyer, our 'covered wagon' through the apricot orchards. Finding bones beneath the tree where the owls lived. Climbing down the cliffs of Carmel to get the abalone in the rocky waters.

It was my own personal stories that compelled to take on the propaganda of myth. I was pissed!

I was born in Honolulu. My first language was Japanese, taught to me by Komiko and Ryosi, the brother and sister who loved and cared for me and Chewie. After Pearl Harbor was bombed by the Japanese, we were evacuated to the mainland. I no longer spoke Japanese. I lost Komiko and Ryosi whom I loved deeply. I never knew what happened to them.

Myth #2: The man's job is to provide for, know what is best for, and take care of the woman.

After evacuation from Hawaii we settled in New York City where our father's mother lived. He joined the Navy. Our mother was pregnant. This was not good. Mimi (we called our parents by their first names, Pete and Mimi) was Rh-negative. It meant dire complications could occur. Because her doctor in NY refused to accept the word of her doctor in Hawaii, demanding a full hard copy of her medical records, he would not sign off on a legal abortion. This was decades ago during wartime. There was no way a copy would arrive to the mainland, let alone to NY in time. Mimi had an illegal abortion that killed her. Men made the rules. Men did not take care of her. Men killed her.

Over forty years ago, my husband Bruce was murdered in our NY apartment. I was there. The perpetrator had just been released from prison. He needed money. If we were a society offering opportunities––half-way houses to transition newly released prisoners, schools to train people, healthcare, food, mental health services––many of the lost, the poor, and the desperate would have a chance. It may not have saved Bruce if the man who killed him had, at the minimum, enough money to to eat and shelter himself upon release. But he might have never gone to prison in the first place if he'd had a chance at something other than crime in order to survive.

Chewie died of HIV in 1992. He died because a government decided he was an immoral degenerate, that the "gay plague" was what he deserved. Had research begun in earnest when the virus was first known, Chewie might have lived but Reagan wouldn't even mention AIDS until 1985 and then little was done to stop it.

Ancient, lost, and destroyed cultures leave evidence. Their myths, past and present, are a source of information, of history. Mass graves, petrified hearts, extinct creatures, evolution, civilizations lost to greed and war, story-carved tablets of stone, vessels for water or oil, gold pendants that adorned a neck, tombs filled with a king's glory, teapots. Clay, bronze, stone, and the painted stories found in tombs or on cave walls. It's all there. All this history.

In 2004 I began sculpting my own histories. I built an archeological site and titled it DIG: An Imagined Archeo-logism to focus on both archeological uncovering of civilizations (Archeo) and story (logism). I wanted to blow up all the ancient, patriarchal myths, the crap propaganda fed to me in so many of those glorious stories. I built my interpretations of Medusa, Daedalus, and Icarus. I built the far reaching incarnations of the propaganda and the collateral damage it has caused for millennia. My view was expanding––the skulls, bones, hearts, and art we refer to as cultural evidence––was presented as an installation at Xiem Gallery, Pasadena in 2008.

Questioning the origins of myths (that still rule) gave me permission to rewrite the narratives I had accepted. It took many years to understand that all destruction is built on myth. We erase history. We are doing it every day.

When I look at history and how much of it I myself have erased, I understand that I've been governed by myths all my life. Yet, all this revelation–history, both ancient as well as my own–gives me freedom. The freedom to open the heart, as in the series PUMP, presented at Studio C Gallery in Los Angeles, 2018. This relatively newfound freedom gives me permission to commune with goofy, endearing SPACE ALIENS, sent here to observe our world. They are the series I've been working on since PUMP, one I will show if we are ever to get out of this shit we've made.

As bleak as it all seems these days, I am profoundly grateful for having found a way to tell my stories, to articulate (sometimes screaming) all the rage and love and ridiculousity I see in my world.

[1] word coined by me, Sierra Pecheur, because it was needed in my own personal lexicon of goofy words

Angels for the Afflicted Series 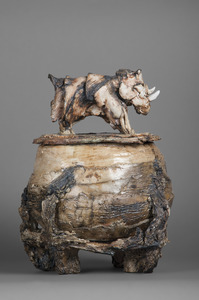 To see more works from Sierra, please visit her website at sierrapecheur.com